2019 sees the celebration of Peel Heritage Trust’s 30th birthday. Since its formation in 1989 it has gone from strength to strength and has many milestones of achievements to show for its efforts; this year, to celebrate, we are undertaking a cultural and heritage twinning with Tarbert, which is located on the shores of Loch Fyne in Kintyre, Scotland.

You may ask why did we pick Tarbert? To realise our unique link you have to go back the best part of 1,000 years for the answers, then you will discover that we have ties by virtue of Vikings, Tynwald, the Church and Kings.

The first event took place in 1098 when Magnus Barefoot was busy laying claim to the Western Scottish Islands, having come to an agreement with the Scots that he may claim any island he could sail around in his long-ship.

One piece of fertile land he cast his eye on was Kintyre, but it was not an island! Undeterred, Magnus landed to explore and upon seeing that there was only a few hundred yards of low lying land at Tarbert (then named Tairbeart), he stood at the helm of his long ship and, with his warriors on the ropes, he was hauled on rollers across the isthmus to claim Kintyre as an island one of the Sudrey Isles. It is supposedly recorded that he stated at the time “It is a fine island, but in fairness not as good as the Isle of Man.”

Our original Tynwald only had sixteen Manx Keys, the other seats being taken by the chieftains of the Sudreys and it should be noted that the Bishop was always known by the title of  The Bishop of Sodor (the Sudreys) and Mann.

Later, roles were to be reversed and the Isle of Man was to be ruled by Scottish kings, one of Robert the Bruce’s castles being located above Tarbert harbour.

To move forward to more modern times and the years when we had a great herring industry, many ‘ringers’ sailed from Tarbert and Campbeltown to Peel for the fishing season, along with fleets from the east coast of Scotland who sailed through the Scottish canals to the West coast they were accompanied by the ‘Herring Girls’ who could be seen all along Peel quay and breakwater gutting the herring and packing them in barrels. 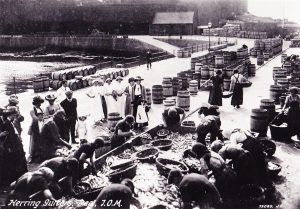 Today all the “Silver Darlings” have gone from our waters and both our fishing fleets are much depleted. Whilst the Manx boats fish scallops and crabs the Kintyre boats fish “Dublin Bay Prawns” and today areas of Loch Fyne are given over to salmon farming; we both now have boat marinas and we hopefully look towards tourism and cultural heritage.

Tarbet Marina looking towards the Isle of Arran.

It is with this in mind that we approached the Tarbert and Skipness Council with a view to becoming twinned and, having had an encouraging response, the Peel Heritage Trust Committee are playing host to a couple of Tarbert’s Council members who will be arriving by yacht to spend Tynwald week in our city. We hope that this will be the start of a fruitful association.   Bill Quine

Peel Heritage Trust was formed in September 1989 by Malcolm Kelly, then chair of Peel Town Commissioners. Its objective is to promote the preservation, development and conservation of the buildings and amenities of Peel, the Island's heritage and its history.